Bubbling away on my social networks this morning was commentary on a so-called “open source vs. commercial software for CMS” decision tree.

Surevine’s approach to working in the open means amongst other things that that we are thoughtful advocates of open source.  We encourage our customers to explore open source options and inspire them to have the confidence to make that choice by dispelling some of the scare-mongering myths.

Fortunately, we are lucky to work with some very smart customers who can see straight through the F.U.D. (Fear, Uncertainty and Doubt), but it is still disappointing to see these tactics deployed, however clumsily.

It’s refreshing and inspiring to see the UK Government’s stance to open source being so confidently adopted across Government.  The smart people at Government Digital Service (GDS) can’t stop winning awards for their design thinking, a central principle of which is “all new source must be open.”  The Government ICT Strategy is to “create a level playing field for open source” and this is infused in everything GDS do, and clearly forms part of their decision tree.

A more logical comparison would be between open source and proprietary, and a decision tree based on that comparison might be useful and supportive rather than promulgating myths.

We think it’s better to keep Open minded. To that end here’s a little sketch of – not a decision tree – but a tree bearing some of the fruits of great open source software. 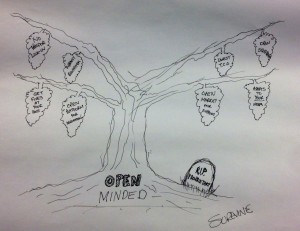